Barry R. Willis: On the edge of realism 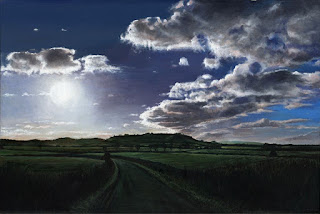 From 20th November until 10th December, Stratford-based artist, Barry R. Willis will be holding a solo show at Gallery150, in Leamington.

Born in Southampton, Hampshire, in 1949, Barry’s interest in art began at a very early age. After taking his Fine Art degree at Portsmouth College of Art and Design, he then went on to an Art Teacher Certificate course at theUniversity of Sussex in Brighton.

On finishing his education he started working as a secondary school art teacher, firstly in Berkshire and then in Wiltshire, later moving to the West Midlands, where he worked as head of department at a comprehensive school in Solihull for twenty years. Today, he works as a part-time leisure tutor for adults, with an emphasis on teaching mixed media.

While studying at Portsmouth, his earlier studies consisted of a series of iconic paintings of rock artists, such as Mick Jagger. He then went on to a different subject matter, based on figures in landscape, which was very much influenced by Thomas Gainsborough’s painting of 'Mr and Mrs Reynolds'. This project involved costume hire and locating figures in landscapes with an emphasis on social celebration. Photographs of the scenes were then taken to form a series of starting points for paintings.

This led on to a series of works inspired by his extensive travels, including an overland trip from London to Delhi, in the late 1970s, and other locations, such as Afghanistan, China, Egypt, Iceland, Laos, Malaysia, Nepal, New York, Norway and Sri Lanka. 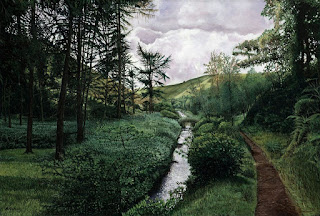 Over the last twenty years, Barry’s practice is chiefly centred around environmental paintings. The artist said: “I find the impact of certain places extremely interesting, particularly their atmosphere, beauty and dreamlike quality, which sets them apart from other places. They often have a surreal feel to them, which is an area that I have always found interesting. The intrigue and tension between what could be and what could never be is a fascinating area and one that I often use within my work.”

Although photographs are usually the starting point, he often deviates from the original image, exaggerating some areas and bypassing others, evoking an air of mystery and fascination.

In his solo show at Gallery150, the artist will be presenting a series of meticulously detailed landscapes and cityscapes in acrylics, using techniques that vary from light washes to heavy impasto, resulting in an intriguing play on light, colour, distance and depth that leave the eyes of the viewer hovering on the edge of realism.

The private view will be held on Tuesday, 20th November from 7pm.