Iranian artist and activist presents works on her journey to freedom

Born in Persia, in 1969, to an Iranian mother and Baraini father, Souren’s ancestral line is linked to the Iranian monarchy. She acquired her Masters in Fine Art at the University of Tehran, where she actively began to use her art in the fight for women’s rights. This led to her arrest by the regime, who considered her portrayals of the female form pornographic and offensive. After a terrible and traumatic period in prison, Souren managed to escape and finally acquired refugee status in the UK, in 2006.

At times colourful and Daliesque, with echoes of Futurism, her works unfold in a series of obsessive images that refer to motherhood, creation and the power and dignity of the female realm. At others, they are more introspective, darker: indignation smoulders behind hurt and challenging eyes; vulnerable, yet proud and voluptuous female forms seem to cower in the shadows, longing for a sanctuary, far from the cruelty that mankind can inflict on its fellow human beings. The figures appear almost perfect, unscathed, implying that their souls or beauty, be it inner or outer, cannot be defiled, no matter what befalls them. The use of colour, combined with recurring elements from nature, symbolise the artist’s need for humanity in a world of brutality, where freedom of expression, sexuality and intimacy is prohibited. The flowing figures represent the dissolution of the spirit in time and space, seeking escape and renewal; the fragmented, elongated limbs, noses, mouths and eyes seem to allude to depravation, denial, the desecration of humanity and the dissolution of the ‘self’.

In this show, the Stratford-based artist will be presenting a series of watercolours, oils, acrylics, pastels and drawings that explore her own emotions and experiences and her difficult and painful journey to freedom.

The private view will be held on Tuesday, 30th of October from 7pm.

Vessels of the soul 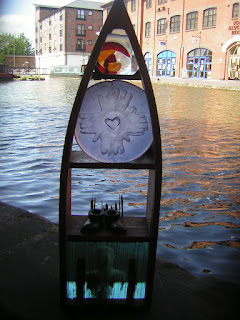 From 9th-28th of October, Wendy Bicknell will be holding her solo sculpture show of at Gallery150.

As a young artist, Wendy dealt with political issues, including feminism and capitalism, but often felt that her works did not engage people at a deep level.  Because of this she changed direction, creating works that draw on her own life experiences and what it means to be human.

In this exhibition the artist will be presenting a series of sculptural works made from ready-made objects, such as birds, containers, books, hands and feet, among others. Glass is also a key component of the artist’s practice, who sees the material as a visual representation of ‘ideas made solid’. These images feature repeatedly, popping up time and time again in different scenarios, manifesting in what appear to be ‘vessels of the soul’, personal shrines or sacred icons.

Wendy states: “I am permanently searching for relevant objects; from boot fairs, second hand shops and occasionally new. When I find enough of them - birds for instance - they sit patiently lined up in my studio until something about them inspires me.  In making these pieces I have had to deal with the awkward feeling of exposing my inner self, as does any artist who strives to be honest, but instead of crushing me the making of the work has made me feel bolder than I have ever felt before. This is the paradox of looking inside yourself for ideas.”

The private view will be held on Tuesday, 9th of October from 7pm.
Pubblicato da Bastian Contrarian a 08:34 No comments: 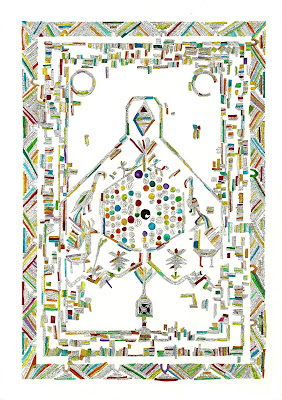 As part of the Warwick Words Festival of Literature and Spoken Word, Italian artist Elena Cecchinato will be holding a fascinating workshop that explores the relationship between writing and drawing.

A voyage into stories of dots and plots, linear dialogues, figurative speech, marking, mapping, weaving, sense and value, thread and trace. You will attempt to go right there: to the edge between the verbal and the visual.
Both words and drawings, with their signs and meanings, are necessary to space and charge reality. They are both vehicles and mediums to unite and conceive reality, working between the ‘I’ and the world, the interior and the exterior, the knowing and the doing. They allow an opportunity for us not to be subdued by the world, but rather interact with it, transforming it  into new narratives. You will create visual abstractions by colouring words and drawing with text.


Age: 18 plus
Materials required: Please bring along a copy of one page from your favourite piece of writing.
Tickets: £22.50
There are only 15 places available for this workshop. Please book in advance through the Festival Box Office on 01926 776438
About the artist:
Pubblicato da Bastian Contrarian a 11:16 No comments: